Everything you need to know about the Duck Curve

In Western Australia, we’re rapidly embracing solar power and taking advantage of our sunny climate in a positive shift to embracing renewable energy. Over 350,000 residential rooftop PV systems have been installed in the South West Interconnected System (SWIS ) to date. By harnessing the power of the sun, we can help create a more sustainable future for ourselves and our environment.

However, this high uptake of solar is not without challenges for our grid. This trend has driven in a reduction in demand for electricity from the grid during the day, as homes and businesses use energy produced by their rooftop solar systems. This means there is increased strain on the grid as it works to keep up with fluctuating supply and demand, which can create instability. Expressed graphically, the effect on the grid is known as the Duck Curve, and if it’s not addressed could potentially lead to blackouts in WA.

Together with the State Government and other industry participants, Synergy is helping explore different ways to stabilise the grid. We’re running several exciting pilots and trials, from testing Virtual Power Plants (VPPs) to the Midday Saver Pilot which is trialling a time-of-use tariff. These pilots and trials help us to develop intelligent energy solutions to help address the challenges that lie ahead.

Learn more about the Duck Curve, and how taking simple steps to adjust your energy use can help you make the most out of your solar investment and a positive difference to the system.

What exactly is the Duck Curve?

The Duck Curve refers to a graphical representation of electricity demand from the grid on days when solar energy production is high and demand in the grid is low. When plotted on a graph the lines and curves form a distinctly duck-like shape.

Essentially, the Duck Curve represents the potential for power system instability, as the grid attempts to cope with extreme changes in demand across different parts of the day.

As more solar energy is exported to the grid, usually across the middle part of the day when the sun is shining, the curves deepen. Then, as the sun sets and solar energy is no longer being generated, the Duck Curve typically shows extreme changes in demand and the grid needs to ‘kick in’ suddenly – which can be difficult. These extreme changes in demand can result in the energy system becoming unstable.

The term was coined around 2012 by the California Independent System Operator in the United States. The graphical representation was a way to demonstrate the demand for electricity from a grid, with hourly solar generation and usage patterns. The Duck Curve is a worldwide phenomenon and now widely referenced in the energy industry. 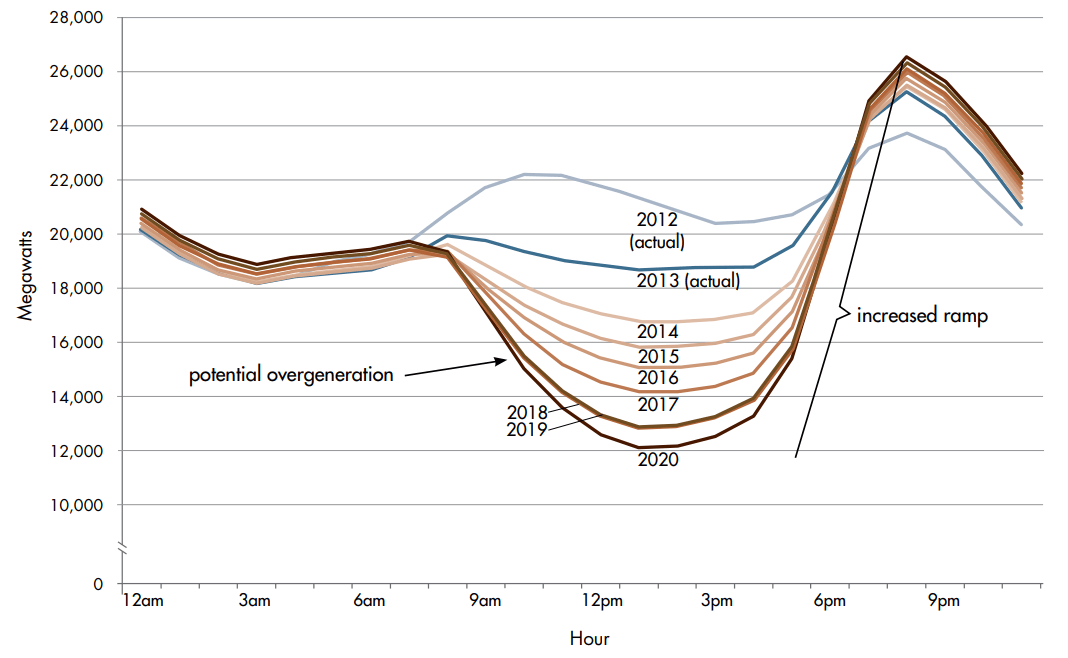 The graph above demonstrates a typical Duck Curve from California, with a similar climate to the SWIS, it can be interpreted in this way:

It’s at the moment of sudden peak demand on the grid that the system may become unstable.

Synergy is focused on trialling initiatives that could help manage this challenge. With WA transitioning to a renewable energy focussed future, the Duck Curve is a useful tool for better understanding and managing energy fluctuations.

What the Duck Curve means for WA

There are clearly benefits of having solar, so it’s not surprising that Western Australian homes and businesses are making the most of it. While the sun is shining, we can rely on solar energy to help keep things powered. But we must also consider how this impacts load and the grid.

As the sun goes down and people return home to begin evening routines like cooking, laundry or watching TV, almost everybody requires electricity from the grid and demand from the grid increases, resulting in ‘high load’. Because larger generators cannot be turned up quickly, when demand increases suddenly, the system may become unstable. This is when there is a risk of a blackout occurring.

While solar is a fundamental part of WA's renewable energy future, we must recognise that solar generation is intermittent. If there is cloud cover, solar energy output can drop very quickly, creating potential instability in the system.

Despite many Western Australians embracing solar, people still need to access electricity from the grid. Making small changes to the way we individually use energy can form part of the solution. If you have solar panels, consider shifting the time when you use appliances, such as your washing machine, to the middle of the day in order to consume more solar energy.

As much of the world invests in cleaner solar energy, WA is not alone in facing problems created by low load. However, the risks inherent in the grid are potentially higher, given our exceptionally high uptake of rooftop panels and our climate delivering lots of sunshine and clear skies. The grid was not designed to manage a two-way energy flow, with significant fluctuations in supply and demand.

These challenges are at the heart of future-focused initiatives to find solutions for a stable and reliable energy future. In partnership with industry experts and the WA Government, Synergy is exploring options that include using Distributed Energy Resources (DER) such as rooftop solar and batteries to support a stable electricity system.

Synergy is running several pilot projects and trials, including the use of Virtual Power Plants (VPPs). One of the first VPPs is currently being trialled with a number of WA schools. The aggregation and coordination of the participating schools' DER enables solar power to be generated, stored and dispatched based on demand. This helps us discover how we can create intelligent renewable energy solutions for the future that help provide grid security and stability. Learn more in our VPP video here.

Our approach is guided by the WA Government’s DER Roadmap that sets our State on a 5-year track to a safe, reliable and efficient electricity system. The Roadmap addresses opportunities and challenges we all face in producing, storing, managing and using energy today and into the future.

Working towards a safe and secure energy system

With our abundant sunshine, solar generation has fast become a positive part of WA’s energy transformation. However, low load, as illustrated by the Duck Curve, presents challenges in managing grid stability to avoid the potential for blackouts.

Synergy is using the learnings of this shift to renewables, from other places in the world such as California and South Australia, along with insights from the pilots and trials we are running, to understand how we can help support the ongoing security and stability of the State's energy system.

Find out more about WA’s intelligent energy future and the Synergy pilots and trials underway.