Perth to Adelaide in an electric car

The quickest way to get from Perth to Adelaide may be via plane, but we can think of an automobile which is a lot more fun!

Anybody who has ever driven across the Nullabor knows the driving conditions can be harsh and the long hours monotonous. On the other hand, there is also breathtaking scenery, iconic wildlife and plenty of friendly faces along the way!

When Rob and Robin Dean, active members of the Australian Electric Vehicle Association (AEVA) took their electric vehicle, across the Nullabor, they found plenty to write home about. At one point, they even crossed paths with another EV heading in the other direction.

Rob has written about their adventures on the Tesla Owners Club WA site, and we asked him to share some of his electric experiences crossing the Nullabor here. 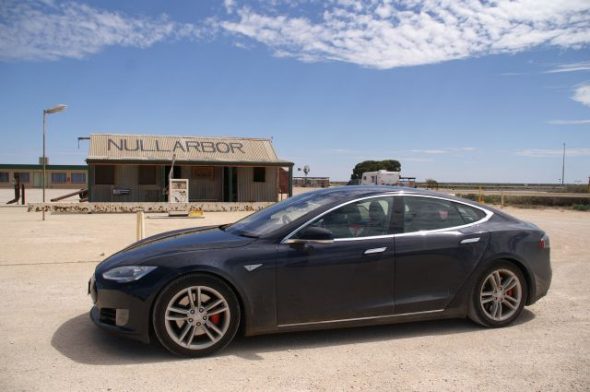 “As far as we know the first electric vehicle crossing Australia was in a converted MG in 2011 with a fair bit of generator use and I guess a hard slog,” explained Rob. “Since that time the Australian Electric Vehicle Association (AEVA) and the Tesla owners club Australia (TOCA) have teamed up to fill as many locations between Perth and Adelaide with charging stations.”

The inspiration behind driving an EV across the Nullabor

“Our motivation was the fact that a large majority of the Australian public believe that crossing large expanses of regional areas can’t be done at all in an EV. The best way to get a message across is by action not just words!”

Lessons from the long-distance adventure

“The complete trip of Perth to Adelaide and return was 6616km. We chose a route that would not involve driving over the same road twice where possible; the Norseman to Ceduna leg of 1200kms was the only road we travelled on two occasions. We learned how positive the general public are towards electric transportation, and many still don’t realise how fast the technology has progressed in such a short time.”

“The fact is an EV with less than 20 moving parts has far less chance of breaking down than an internal combustion engine vehicle with more than 2000 moving parts.”

“Don’t believe everything you read about EVs in the media. Take the time to research electric transportation and how it will benefit Australia in many ways.”

Learn more about the truth behind common myths about owning an EV or read more about Rob’s adventures through the Tesla Motors Club.