What makes up the electricity generation mix in Western Australia?

From your morning slice of toast to your laptop, phone and that series you’re currently bingeing before bedtime, every day is powered by our demand for electricity.

Meeting our daily electricity needs involves electricity production from a range of energy sources, which for Synergy currently includes a mix of coal, natural gas and renewable energy sources such as solar and wind.

The process by which these energy sources produce electricity is known as generation. Learn more about electricity generation in Western Australia, how and why Synergy's generation mix is changing and your role in the State’s energy system transition.

Synergy is the largest generator of electricity in WA

Here in WA, Synergy is responsible for about half of the total electricity generation in the main electricity grid known as the South West Interconnected System, or SWIS. Our generators use a range of energy sources, with major power stations (also known as power plants) in Collie, Kwinana, Cockburn and Pinjar and smaller power stations and renewable generation sites across the SWIS.

The rest of the electricity in the SWIS is generated by other electricity generators, as well as homes and businesses with small generation systems such as rooftop solar PV. 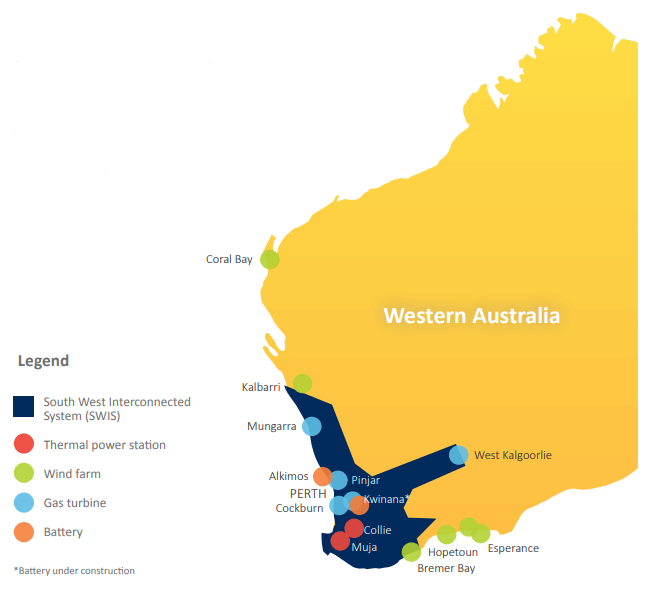 Energy fact: According to figures from energy.gov.au, in 2019-20, electricity generated by natural gas provided more than half of the electricity used in WA. By comparison, coal was the main energy source used to generate electricity in New South Wales, Victoria and Queensland.

Our electricity mix is changing

WA’s power system is supported by large gas and coal-fired generators. These generators play an important role in providing a reliable source of electricity for WA households and businesses to meet our collective electricity consumption needs.

However, as the energy system transitions, and the uptake of rooftop solar and demand for electricity generation from renewables increases, Synergy's coal-fired generation will be phased out over the next five to seven years.

By phasing out coal-fired power generation, it is estimated Synergy’s carbon emissions will be reduced by 80 percent by 2030 compared to 2021 levels. This is a major step towards helping to achieve the State Government target of net zero emissions by 2050.

As we step into our intelligent energy future, we’re working towards introducing more renewable energy solutions for everyone.

The role of rooftop solar PV

The energy transition is already happening, with people embracing renewable generation. In fact, around 36% of WA households now have rooftop solar PV systems.

Energy fact: All of the rooftop solar PV systems in the SWIS combined can generate twice as much electricity as the State's largest power station at certain times of the day.

Renewable energy sources, including rooftop solar systems, generate electricity alongside traditional generation sources - but these don’t always produce electricity at night or if it’s a cloudy day. For example, if you have a solar PV system, you’ll still be drawing power from the grid when the sun goes down, unless you have a home battery system installed.

Projects like the State Government's Big Battery will support the transition to increased renewable energy generation in the SWIS, and can assist in managing grid stability by charging and discharging to smooth the supply volatility caused by solar generation at certain times during the day. It will also charge or soak up excess electricity from the grid when demand is low and generation is high during the day, storing it, and then discharging it into the grid later when demand picks up again in the evening.

Your role in WA’s energy transition

Increasing renewable energy sources of electricity is a critical step to address climate change - and the challenge of keeping the grid secure, stable and reliable needs to be considered too.

As a Synergy customer, there are a number of ways you can support WA’s energy transition. You could:

As part of our changing energy generation mix, with the State Government and other industry participants, we are involved in a range of pilots and trials to explore how we could better manage supply, store and share energy across WA. Find out more about these pilots and trials underway to help support WA's energy transition.